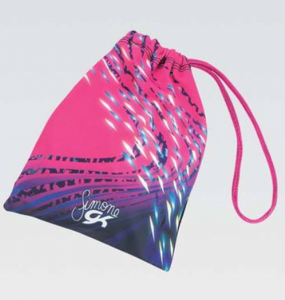 Champion Simone Biles is the most decorated American female gymnast in World Championships history. She has a total of 14 World medals, 10 of which are gold. In 2016, Simone Biles won the All-Around Gold Medal for a third consecutive year. She was also awarded the 2016 Female Olympic Athlete of the Year. At the 2016 Olympics, she was awarded the Gold Medal for Women’s Individual All-Around, Women’s Vault, and Women’s Floor, the Bronze Medal in Women’s Balance Beam, and a Team Gold Medal.  This gymnastics grip bag was designed by Simone and manufactured by GK.